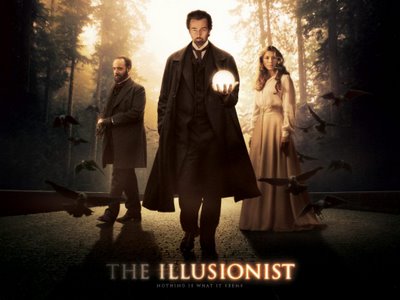 'The Illusionist' stars Edward Norton and Paul Giamatti as two men pitted against each other in a battle of wits: Norton as mysterious stage magician Eisenheim, and Giamatti as Vienna's shrewd Chief Inspector Uhl, with Jessica Biel sharing the screen as the beautiful Sophie von Teschen. When word of Eisenheim's astounding illusions reaches the powerful and pragmatic Crown Prince Leopold (Rufus Sewell), the ruler attends one of the magician's shows in order to debunk Eisenheim during the performance. But when the Prince's intended, Sophie von Teschen, assists the magician onstage, Eisenheim and Sophie recognize each other from their childhoods and a dormant love affair is rekindled. As the clandestine romance continues, Uhl is charged by Leopold to intensify his efforts to expose Eisenheim, even while the magician gains a devoted and vocal public following. With Uhl doggedly searching for the reasons and the man behind the trickery, Eisenheim prepares to execute his greatest illusion yet. 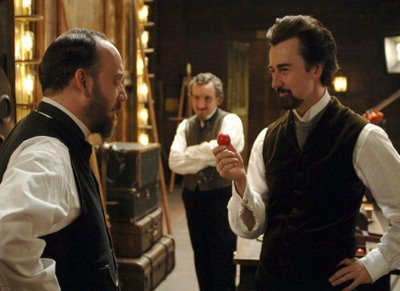 And my own opinion? See this movie. It was a true rarity in the heat of summer – a smart, thoughtful, intelligent movie made for adults. The film is one of those that I will buy on DVD and watch when I want to lose myself in another world. And visually, Prague substitutes nicely for 1900’s Vienna. A fantastic cast, a well-paced script, and just enough special effects to entertain without compromising the simple story.