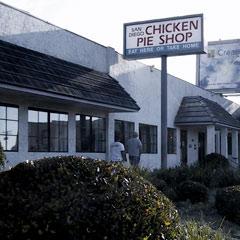 Last night was again Date Night, my favorite night of the week. Ric and I made it a point to get out of work on time, and we made a beeline for the one and only San Diego Chicken Pie Shop. The place is described as a cross between hospital food and your Mom’s kitchen, the Pie Shop is as much a walk down memory lane as it is a place to eat. A native of San Diego, Ric has so many memories of having lunch or dinner there with his family. It’s good, cheap food served by friendly, no-frills waitresses. That’s good enough for me.

After dinner, we headed home to change from work clothes into shorts and t-shirts. Then it was back to Balboa Park for a concert by the Marine Band San Diego. We thought we were going to be early, but we were surprised to see such a large number of people there for the show. We ended up parking in the far southeast lot and walking quickly to the Organ Pavilion just to make it to the show on time. First thing we noticed was that the average age of the attendees was somewhere near 60 years old. Not surprising, since we have so many military retirees here in town. 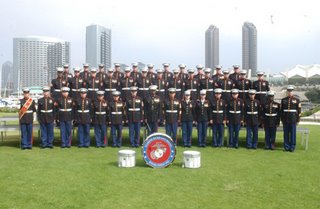 The band played a bit of everything, from marches to blues to the theme from Superman. They finished with the melody of Armed Forces themes, of course, and the crowd loved them. I thought they were incredible. (Of course, the fact that I have zero ability to play any musical instrument means I have huge respect for anyone that can.)

Another beautiful night, another great date with my husband. Did I mention how much I love having this time to ourselves? Creating Date Night is definitely one of the best things we have done for ourselves in a long, long time.