Okay, so maybe that is not our town’s nickname. Maybe it’s actually America’s Finest City. But this past weekend, it was pretty damn gay. Yep, San Diego’s Gay Pride was in full effect this past weekend. The theme this year was “Equality: No Looking Back.”

The weekend's events began with the Frontrunners 5k Run. Since Bridgette and I were both out until very late Friday night, the 7:30am start time Saturday morning was pretty tough. Still, we went, we ran, and we had a great time. (Congrats, Bridgette, on your first 5k. And thanks, Chica, for running with us!)

After the 5k, we hurried home to shower, get dressed, and head back down to Hillcrest. The parade kicked off at 11:00, and we had a lot to do to be ready. We had to set up the rainbow sarongs over the top of the roof rack, set up the canvas gazebo next to the Jeep, and of course we had to get Ric's field kitchen set up. It was truly quite a sight to see Ric, wearing his Grill Sergeant apron, frying up homemade tortilla chips. And boy were we popular? I think Ric must have fed nearly 50 different people.

The parade itself was lots of fun. Click here on the link of the hot boys dancing to see one of the floats. Make sure you listen carefully, because Chica entertained herself with shouts of "whoo hoo, hot boys... yeah!" 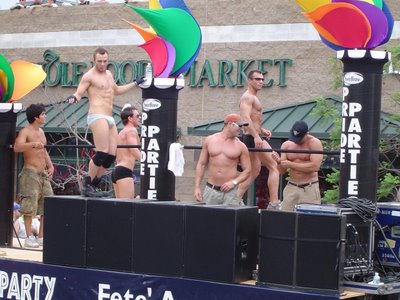 And there were dancing girls, too! 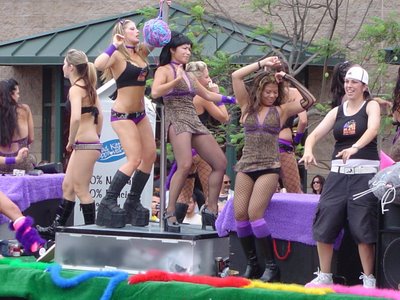 After the parade, we headed back home once again to drop off all the gear. We made good time getting back to the festival, caught a shuttle from the old hospital, and were able to avoid the entire parking hassle. San Diego Pride really does have it together in planning a big party.

The festival was fun. Good food, sexy men, and lots of shopping with the vendors. I bought a t-shirt that reads, "Speak your mind, even if your voice shakes." A great thought.

Of course, the highlight of the day was watching the three drunk/stoned lesbians in the El Camino. While we were waiting for the shuttle bus to take us back to the car, the El Camino crashed into a cab. They pulled over to the curb and sat there like they were in some sort of trance. The details are way too much to recount here, but I will say that they were the most entertaining things about the whole day!