I am back from the Memorial Ceremony for the Dark Horse Marines, and I don't really know how to explain how I feel. Obviously, the mind, heart and soul are unbelievably complex things. How else could a person feel overwhelming pride, a broken heart, and hope for the future... all at the same time?

First, the logistics of the ceremony. We gathered at the base theater, one of the only facilities large enough to accomodate the standing-room only audience. Family members were seated front and center, and the unit Marines, their friends and loved ones filled the remaining rows. On stage, there was a low wall with a framed picture of each of the fallen Marines. 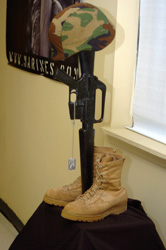 The Colors were marched in, followed by the Invocation from the Chaplain. Then, as the Marine Hymn played, three squads of Marines marched in. In order, they presented a rifle, helmet and dog tags, and boots at each of the photographs. The Battalion Commander spoke, followed by each of the Company Commanders.

Throughout the service, my attention was drawn to these displays. The image of their rifles, helmets and boots is riveting. It is simple yet powerful, a statement of all that the Marine was in his finest moments. Yes, each Marine was an individual, with a life and hopes and dreams. But in this moment, he is honored for his accomplishment - being a United States Marine.

Amazing Grace was played by a Marine Bagpiper, followed by the Final Roll Call. The Sgt Major calls out the names of three or four Marines, who each answer "Here." He then begins to call the fallen. ""Corporal Smith?" Silence. ""Corporal Ross Smith?" "Corporal Ross A. Smith?" The last time his name is called, the sound of a bell rings out. The Marine is accounted for, present at the Final Roll Call. Finally, the service closes with Taps.

I struggled to maintain my military bearing during the service, but I was hardly a stone. The tears flowed during Final Roll Call, as the Sgt Major's voice echoed throughout the hall. He called out for them, but they were not to answer. And each name, repeated, was a reminder of another life lost.

I was not alone in my grief. Ric was by my side, struggling as well to hold himself together. All around us, Marines sat at a position of attention, seemingly oblivious to the tears that streamed down their own faces.

I sit here now proud of each of the Marines from Dark Horse 3/5. They continue to serve with honor and courage. I am also proud to be part of the 200+ year legagy that is the United States Marine Corps.

I am heartbroken by the loss, though, of these Marines and all the other service men and women fallen in combat. They truly gave all, and I grieve for them, their families and friends.

Finally, I am full of hope for the future. That may seem odd, after the events of this morning. But it was the sight of a hall full of Marines that reminds me how good we all are. Regardless of politics or religion or other social battles, the Marines I saw today stand side-by-side to answer any call, any challenge or assignment. They are the best of us, and they give me hope.