I don’t read my horoscope. I don’t call psychic hotlines. Personally, I think most of that stuff is crap. But every now and then, something happens to me or around me and I like to entertain the fantasy that it is a message or some kind of sign. For example, Ric and I just happened to be scheduled to visit Hawaii for nine days at the same time our co-worker was there recovering from a medical problem, so I took that as a definite sign that we were supposed to spend time with her while we were there. Nothing too mystical about that, I suppose, but that is the sort of thing I mean. 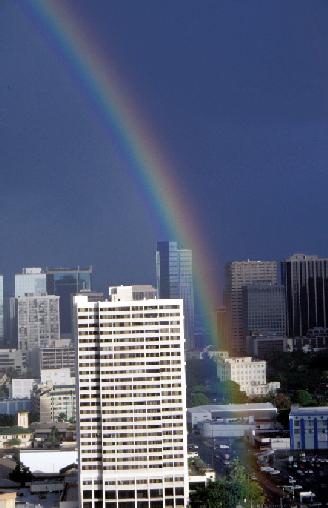 Right now, I am not at all happy at work. There is not really one thing that is the problem, but rather a general feeling of “blah” about being here. On the way to work this morning, a crazy idea popped into my head about opening my own business. As soon as I thought that, I looked up ahead and saw a huge rainbow. Since it wasn’t raining on me, I took that as a cool sign that I might be on to something. For the next few minutes, I thought about what kind of business I might open. Before I could settle on any one thing, though, I drove under the bridge at I-5 and came into the downtown area. From that vantage point, I could see the entire rainbow, from end to end. Alas, the right end of the rainbow landed directly on top of my current office building.

So, what did the sign mean? I can think of three possibilities. One, the rainbow appeared just as I thought about opening a business, so the message is to follow my dream. Two, the rainbow’s end was at my office, so the message is to find my happiness in my current job. Or three, the rainbow may have just been there because the sun makes rainbows when white sunlight passes through rain drops. The third option is far less romantic and mysterious, but certainly the most accurate.

(And no, this was not the rainbow this morning. I just snagged this off the web.)