Early morning, and we were once again out front waiting for the dive van to pick us up. 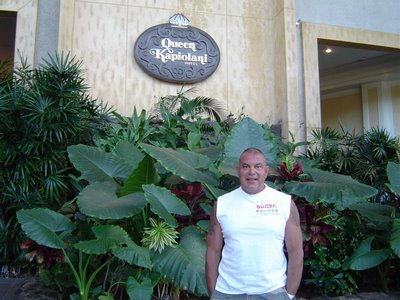 And we finally took pictures of the dive boat! 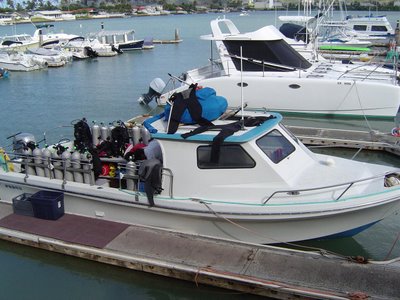 Without a doubt, today was some of our best diving ever. What an incredible morning we had! We started with a trip to what is called New Barge. Depth was 85 feet, and the barge itself was huge. More interesting than the wreck, though, was the incredible amount of sea life that has formed around it. We saw the coolest sea turtle, sleeping out in the open with his head laying against a rock. It was awesome! 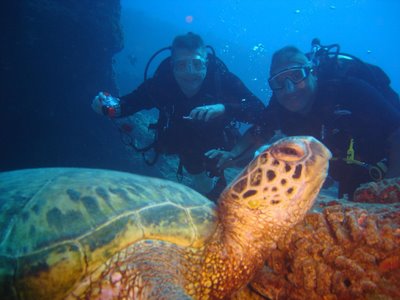 We took a dozen pictures of it, of course, then explored the rest of the site. On our way up the dive line, we noticed the turtle was surfacing. We got more great pictures while he was at the surface getting air. 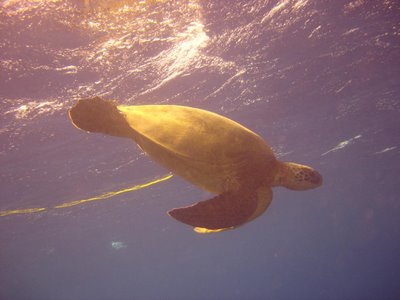 From there we went to Fantasy Reef, which was such a great dive spot. Everywhere you looked, there was sea life. We saw octopus, squid, moray eels, and fish of all kinds and colors. The coolest thing we saw was the Spotted Eagle Ray. He was SO neat, just floating through the water all around us. He kept his distance, but he continued to circle our group of divers. Not everyone is lucky enough to see such a beautiful ray, so we were feeling pretty good. 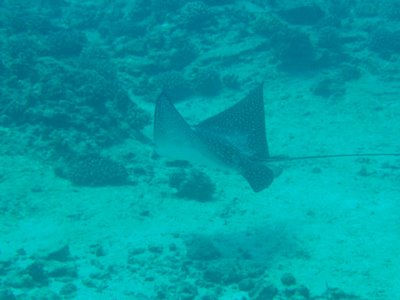 After the diving, we joined our friend Kurt and headed to the mall. We were in search of Li Hing Mui powder for a friend in San Diego, so we found a shop called (no kidding) the Crack Seed Center. Too funny. We stopped at a hidden little place called the Side Street Inn for dinner, then came back to the hotel. Our dive time Wednesday is not until 11:00, so Ric took the time to work out and I stopped in to the local Karaoke bar for a drink and a song. Unfortunately, American Idol was on, so there was no live singing in the bar. After a couple of beers I was more than ready to get out of there, so Ric and I met back up at Hula's for a couple of drinks. Tired again, we headed to bed. Man, oh man, we have slept a lot since we got here. Guess that makes it a great vacation!