Ric and I were up and ready to go early, and the AquaZone van picked us and took us to the eastern end of the island for diving. First up was the Corsair, a WWII plane that crashed on a training mission when the pilot ran out of fuel. It sits at a 107 feet depth, and it is an unbelievable site. The boat was small and the swells were large, so entry into the water was pretty exciting. We followed the dive line down though, and the bottom was visible even from 60 feet up. 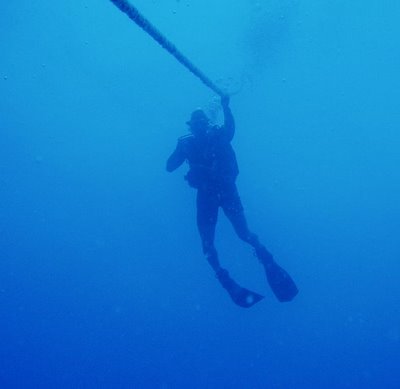 Ric on the dive line, making his descent 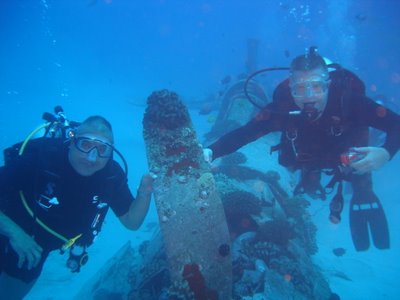 Ric and I, posing with the airplane at 107 feet

After the Corsair, we headed into more shallow water to dive a volcano crater. There we saw sea turtles, a small octopus, and lots of other fish. Ric even caught one of the fish in a picture with me, posing with a big fish smile. Too funny. 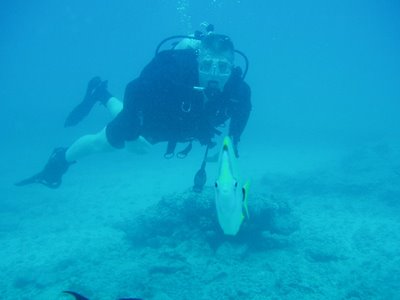 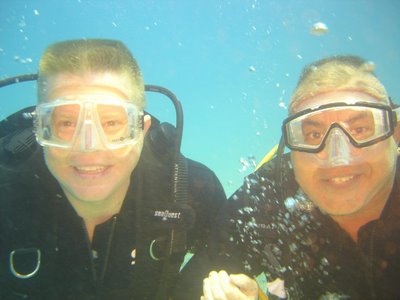 The more important thing today came during our second visit to see our friend, Nancy, at the hospital. The doctors said that she is making miraculous improvements, and they have approved her for a medical flight back to the mainland in a few days. That means she will be back home in San Diego, close to her family and friends. They also covered her trach tube, and she was able to speak. We held my cell phone up so she could talk and listen, and she spoke to her daughter. It was all we could to do to hold back tears when we heard Nancy's voice saying, "I love you, too, Lexi." I know Nancy has a long way to go to recover, but hearing that and seeing her face light up gives me hope that she will make it. What a fantastic day!

Afterwards, we took a great nap, then Ric made it to the gym and I worked on this blog. A couple of drinks at Hula's and some retro 80's videos, and we had enough. It was back to the room for an early night of sleep to be ready for diving again tomorrow!